reconnecting and cleaning up aging email lists: why & how to re-permission

A few months ago, an email marketing client called who had been collecting email addresses for over 8 years, and they’d never sent out an email. They ask what they needed to do to start sending, since some of those addresses would be pretty old and I answered: time for a Re-Permission Campaign.

First, we had to talk about why we needed to ask permission again…

But fear not, you don’t have to throw out your whole list and start over. You can warm up (and clean up) your list with a Re-Permission Campaign.

A Re-Permission Campaign is a simple, straightforward campaign that asks your subscribers whether or not they want to keep receiving your emails. It sets expectations, and offers a simple Yes (confirm their interest) or No (Unsubscribe) option. Of course, you’re shooting for engagement here, so the email should be eye-catching! Check out Boulevard Brewing Company and Chipotle’s Re-Permission emails, for example: 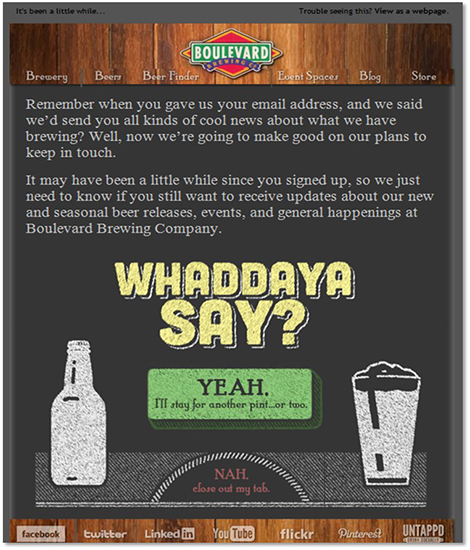 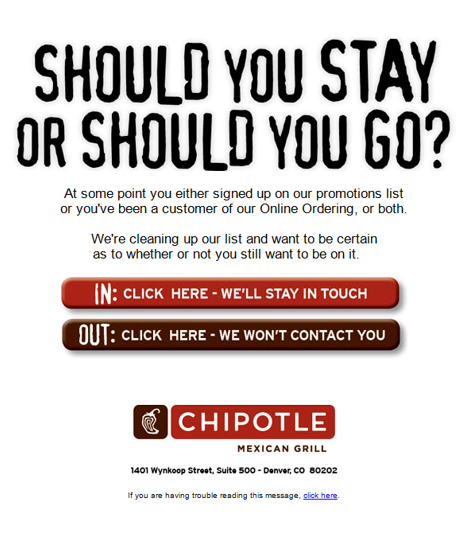 The Yes page can link to a thank you page, either on your website or using the emfluence Landing Page Generator. If you use an emfluence page, you can make it a pURL where subscribers can update their contact information or add additional information. Boulevard Beer asked subscribers that confirmed to choose their favorite beer so they could personalize emails down the road to those subscribers.

Be sure your test both the email and the landing page(s) for your Re-Permission Campaign. Once you’re ready to go, if you have more than a few thousand contacts, don’t just send it out to everyone at once! Inbox providers like Yahoo! and Hotmail get suspicious when they see a large volume of messages from an email marketer that they haven’t seen in a while. Your message could end up in the junk folder, or worse; your message could go nowhere at all. Inbox providers don’t have to deliver your email and they don’t have to tell you they didn’t deliver it. Their biggest priority is protecting their inbox users.

Instead of sending one big email deployment, split your list into segments of fewer than 10,000 each. Send to the first segment and watch your bounce rate and domain-specific reports. You can expect to see a higher-than-industry-average bounce and unsubscribe rate (after all, you’re asking people to unsubscribe if they’re uninterested). But, if you notice that 0% of Gmail subscribers opened, clicked or did anything, it means you probably didn’t make it through to the inbox. Check to make sure you’re not on that inbox provider’s blacklist and use the emfluence Pre-Flight test to be sure you pass spam filters before you send again.

If, on the first segment send, you don’t see any indicators that you have had deliverability problems, then continue sending to the rest of your list, one segment per day, keeping an eye on your reports (just in case).

After your campaign has had a few weeks to capture confirmations, unsubscribes, and has cleaned out the non-existent – a.k.a. hard-bounced – addresses, you’re left with a clean and engaged list. We actually recommend reaching back out to those contacts that neither confirmed nor unsubscribed to offer them another chance to stay on the list.

Instead of Re-Permission, what about just Re-Engagement?

Even if you’ve been sending to your lists regularly, there is probably a portion of your email marketing list that are aged and inactive contacts that are costing you money to send to. If they never open (and never will), they’re dragging down your engagement metrics like opens and clicks and make your list look lower performing than it really could be. Consider sending a Re-Engagement Campaign (just like the Re-Permission Campaign) to contacts who haven’t engaged in a while, for example, 13 months. This will clean out any abandoned email addresses, inboxes where you’re going to Junk, and generally unengaged subscribers. 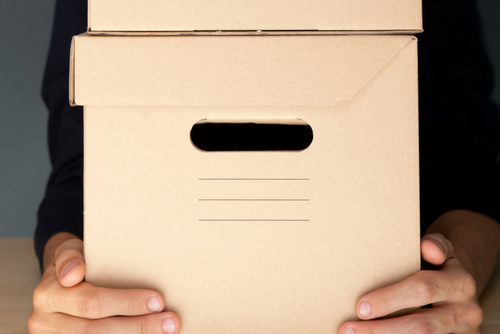 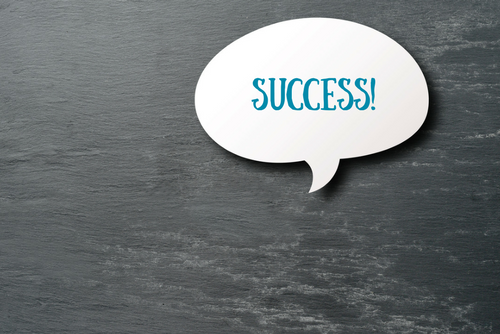 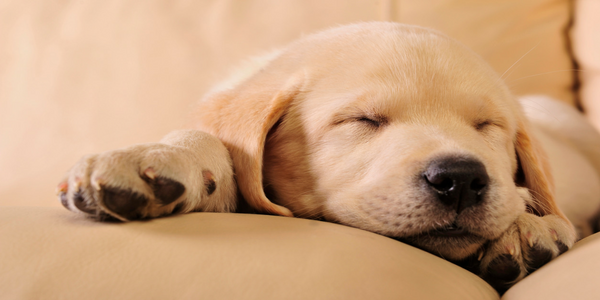 5 Life-Hacks to Adjust Your Spam Score…and a Puppy