Back in July, Alyssa posted about one of Twitter’s newest marketing tools, Twitter Lead Gen Cards, that can help convert social media connections into email contacts.

As a marketer, the goal for Twitter Lead Gen Cards is to do away with traditional landing page email sign-ups that take consumers out of their native browsing experience all together, and instead capture it seamlessly within the social platform.

emfluence recently executed a one-month test program for our business-to-business-focused client ScriptPro, to gauge their customers’ response to Twitter Lead Generation Cards, and whether they convert social media connections into high-quality email subscribers or leads. Because we were targeting a chain drug store conference and the pharmaceutical industry (on the B2B side) hasn't been as early to adopt social tactics as other industries, we wanted to gauge how it would resonate.

To reach the largest trade show audience possible, emfluence executed promoted Twitter campaigns before, during and after each event. This meant ScriptPro could be part of the conversation and reach their audience with relevant messaging, increase their visibility on-site at the events, and convert quality leads over a multi-day period surrounding the trade shows. 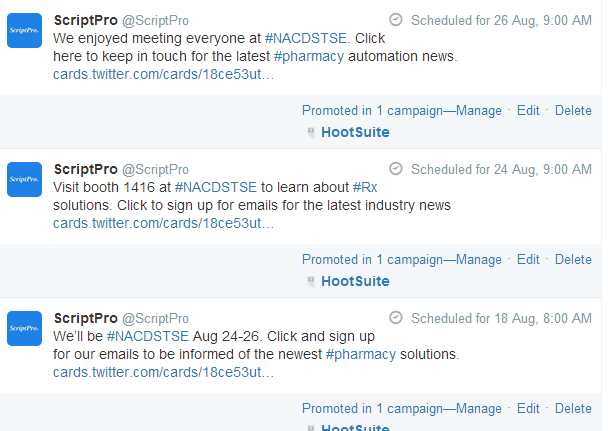 Prior to the trade shows, ScriptPro used promoted tweets with Lead Generation Cards to announce their event attendance. During the shows, ScriptPro engaged in real-time with attendees on Twitter, and also paid to promote tweets that encouraged attendees to visit ScriptPro’s booth space. After each trade show, the cards focused on follow-up and thank you messaging.

Targeting the conference audience with three-stage messaging worked. The cards’ impression and engagement levels were highest around the days leading up to the event, during the first days, and tapered off slowly as the events finished.

Following the “bell-curve of social buzz” around the trade shows allowed us to effectively reach our target customers when they were most active on the social channel.

Another benefit of Twitter’s Lead Generation Cards was being able to reach quality leads that wouldn’t have engaged on-site at the event otherwise, and even engaging those that didn’t attend the conference itself, but were following along on Twitter.

Across three pharmaceutical trade shows in July 2104, the promoted tweets got over 43,000 Impressions, and more than 350 prospects clicked to read more on the Twitter Lead Gen card, meaning we can see that our audience targeting and even our offer were likely on track. However, we didn't net any high-quality leads converted through the form. It seems that this may still be too new and the audience may be leery of giving their email address via Twitter. Either way, it's great to know that about this audience and to have had such prominent brand exposure to the targeted audience.

If we wanted to do a folllow up test with this client, we could test different copy, explaining exactly how to submit the card and what the information will be used for to encourage those on the fence to convert. We could also test different offers or different creative. At emfluence, we'll definitely continue to test with various brands, industries and audiences (and report back here on the blog, of course).

Remember that the budget behind promoted tweets that include Lead Gen Cards goes towards impressions and not actual clicks/conversions, which is different than with traditional Pay-Per-Click advertising. It’s essential that campaigns be actively monitored, tested, and tweaked over time if you’re not seeing results.

With the tools that Twitter makes available, all you need to execute a successful Lead Generation Card campaign is a short testing period, time to analyze and optimize, and of course, a stellar lead follow-up campaign to nurture those leads into sales.

Want to get started but not sure how to dive in? Reach out to us at expert@emfluence.com. 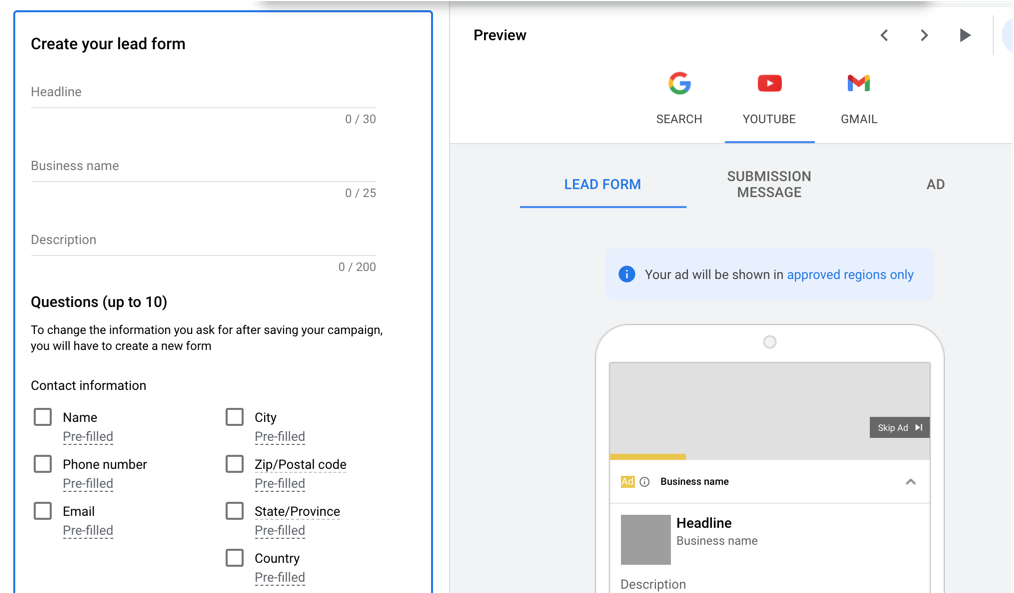 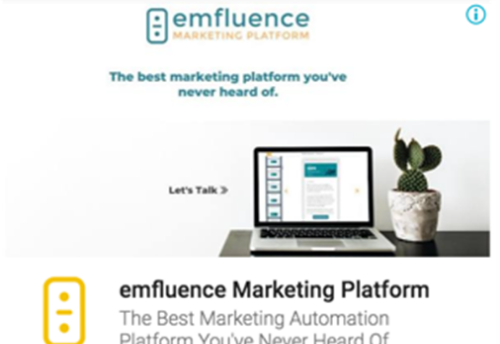 The Future of Ad Copy is Responsive