The importance of live streaming video in your content mix.

We're currently in the midst of a social arms race around live video streaming integrations and roll-outs across Facebook, Twitter, and other major social players. Live video streaming, amongst other next-generation Web innovations like virtual reality headsets, the Internet of Things (IoT), and other wearable technology, all make up what many digital experts and Web data scientists like John Markoff and Tim O'Reilly experts have already dubbed “Web 3.0.” Web 3.0 can be summarized as the "connective intelligence and learning of all Web users and devices – or all of your things talking to the other things about all of the things."

From a consumer perspective, video and, more specifically, LIVE video is where social media giants are placing their bets on a user-generated content production and sharing perspective for the foreseeable future.

Live video streaming, in a nutshell, gives consumers the ability to use their smart phones or tablet devices to stream live video through dedicated apps and either stream openly worldwide or narrowed to friends, family, co-workers.

Live video streaming is still relatively new and not fully adopted by consumers and marketers, but Facebook's recent announcement of Facebook Live is looking to bring it to the masses. 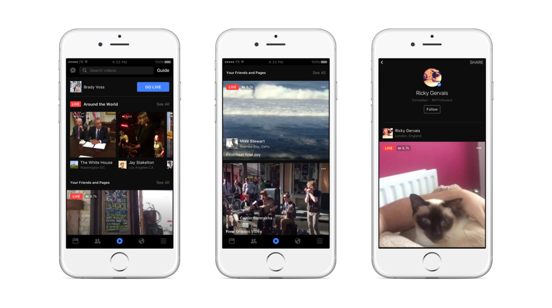 Social Video on Fast-Forward Since 2015:

When Meerkat popped up at SXSW in 2015 and mobs of early adopters jumped on it (boom – double mammal pun), it was one of the first major catalysts that brought live streaming video to the masses and brings us to where we're at in 2016. Meerkat was subsequently quashed weeks later by Twitter, which cut off access to the Twitter social graph and threw their Tweet weight behind Meerkat's biggest competitor, Periscope – which they had acquired in January 2015 for $75-100M.

Since that time, Periscope has brought in over 10M users and 100M broadcasts and averages 350k live streaming hours of video PER DAY. Twitter put their live-stream flag in the ground early – knowing full well that Facebook was already heavily pushing toward natively hosted video and would be launching their own in-app live streaming service. 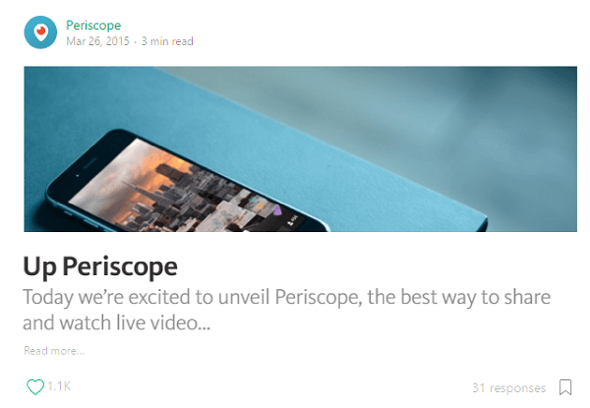 A quick aside: It's important that we, as marketers, understand the intent behind these types of category moves and shifts from Facebook and Twitter because we've seen it before and will again. Just this past week, Twitter won the bidding war for live streaming of the NFL's Thursday Night Football. The arms race is real, and we're going to see new battles for video streaming rights fought in the coming years.

Here's the rub: In an ever-cluttered world of apps and content consumption platforms, every social media platform is placing increasingly higher importance on keeping YOU, the consumer, on their platform as long as possible – which, in turn, impacts how brands and advertisers need to define their content channel mix as well. Think about it this way: There's not suddenly going to be more hours in the day to split across more social platforms – which is why the share of audience time is so valuable to these social platforms and they continue to roll out features and integrations that are designed to keep us "in app." A recent study performed by Cisco predicts that, by 2019, 90% of all global Internet traffic will be in video format.

The State of Facebook Video and Targeting the Competition

Look at the stats below and the calculated moves that Facebook has made in the last year and you'll understand why they are throwing so much weight behind live video and are looking to take content share away from the other major players.

Ok, so it's painfully obvious that Facebook's made concerted efforts to get behind video as the preferred medium in a big way over the last year. So how will Facebook Live and other services like Periscope affect the content game going forward?

“Going live” on Facebook feels special because you are going live with the people you care about.
Facebook Live is interactive and fun…"
(from the Facebook Live PR Release).

Wow, all of the feels, Facebook. ALL OF THE FEELS.

Don't you just love the over-the-top self-importance and grandstanding of social networks presenting their new tools and explaining why they are so vital to you on a personal, human level? It's just the best. 🙂 You know that the Facebook powers that be are foaming at the mouth for their "go live" catchphrase to become entrenched in the cultural ether with the other social buzzwords.

Grandstanding aside, the fact remains that live video is going to impact everyone in a significant way for marketers and consumers alike. Just the 10x increase in engagement on live video stat from above creates a massive groundswell and proves the value of brands connecting with their customers and fans in real time.

From a content production and sharing perspective, consider the following opportunities that will now be available to you through live streaming services. Consumers want to feel like they are part of the action, even if they aren't there. You now have the ability to deliver on this desire and establish relationships and connections on a macro level that never previously existed.

The ability to broadcast live to your existing Facebook fan page follower and event attendees will allow for the showcasing of company events, expos, behind-the-scenes looks, and live Q&A sessions; the opportunities are endless. Live streaming is still a relatively new medium, and as such, marketers are still feeling it out and how to execute and monetize it.

If you are a marketer who wants to jump into the world of live streaming video via Facebook Live or Periscope, then it's important that you grasp all the other content opportunities that can be re-purposed from a live-stream or "scope.” It's feasible that regularly creating and executing live video content doesn't seem realistic because of time constraints, budgets, or simply the hurdle of "who is going to talk about what, and why would people care?"

These are fair questions and concerns, especially when producing "exploding content" or video content that goes away after a set period of time. Much like Snapchat's expiration feature, Periscope and Facebook Live feeds are deleted after 24 hours. So, as a marketer, how does one weight the resources required to create video and establish a consumer want around exclusive, time-sensitive content that goes away in a day versus publishing a piece of video native to channels that lives forever? The good news is that you don't have to make that choice – you can have it all.

Live Video: How to Get the Most out of it

Once you start streaming and building your audience, you can leverage the power of the "expiring offer" and consumer mindset of not wanting to miss out. Consumers are bombarded with these limited-time call-to-action marketing messages every day, so your live video strategy doesn’t need to deviate drastically from a methodology that’s already proven successful.

The key takeaway and considerations are this: Establish and demonstrate the value of your live streams upfront, give some of the content and value away to your viewers, and establish your fan base, and then viewers will tune in because they will expect and know that you'll deliver the goods to a potentially global audience.